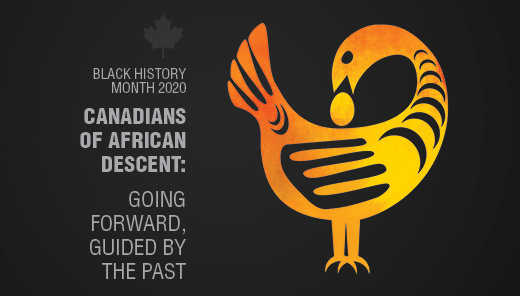 The theme for this year’s Black History Month, “Canadians of African Decent:  Going forward, guided by the past”, is inspired by the United Nations International Decade of People from African Decent (2015-2024).

In researching the origins of Black History month, we came across a number of informative websites, but we invite you to explore the following site:  https://www.canada.ca/en/canadian-heritage/campaigns/black-history-month/black-canadians.html

There were many songs that talked about the railway which contained coded messages to slaves in the 1800’s.  Swing low, sweet chariot and Wade in the Water were 2 songs that held such messages.  Swing low, if a slave heard this song, they knew that the time was near and they had to be ready…Sweet Chariot was the railway and swing low meant it was coming to the south to carry them away to Canada.  The Wade in the Water was telling slaves to walk in the water to escape the dogs that were chasing them.

This is where the theme resonates with us, going forward guided by the past.  People knew what was right and there was a clear path that lead to freedom and even if it is difficult, we can succeed.  Standing up for equality, persevering through adversity.  The underground railway had to be hidden but today we are more able to stand up, travel in the daylight and help our brothers and sisters to stand up and find freedom.  What it looks like today is very different than it was in the past, but the message and the way is clear.  We must look out for others who don’t have the same resources or power, use our privilege to raise up all of society.  Let’s move forward by having clear visions of what world we want to live and stay focused to achieve them, our railway doesn’t have to be underground, our generations can be open.  This is the solidarity of the union and equality of Human Rights.  Progress can be achieved when we are guided by the past.